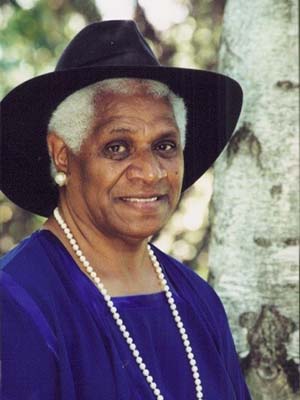 Dr Evelyn Scott AO was an advocate for reconciliation and the advancement of Aboriginal and Torres Strait Islander peoples and women for more than 30 years.

During her term 250,000 people marched across the Sydney Harbour Bridge in the Walk for Reconciliation, Corroboree 2000, in support of meaningful reconciliation between Australia’s Indigenous and non-Indigenous peoples. Scott was awarded honorary doctorates from the Australian Catholic University and James Cook in recognition of her significant lifelong contribution.

In 2003 she was appointed an Officer of the Order of Australia for service to the community through leadership in the area of reconciliation, as an advocate for the empowerment of indigenous women, and as an instrumental figure in the establishment of legal, housing, employment and medical services for indigenous communities.

A tribute to Evelyn Scott is featured within the artwork in Reconciliation Place, Canberra.

“Reconciliation is not an isolated event but part of the fabric of this nation... We extend our hand to other Australians. Those Australians who take our hands are those that dare to dream of an Australia that could be.”

“In the true spirit of reconciliation, we would like to acknowledge the Ngunnawal peoples of this region who have had a continual and existing connection to this land, we acknowledge their living culture and their ongoing presence and contribution to this region.  Our special thanks to Mr Bradley Bell for his Welcome to Country…… today we are with you in spirit.

On behalf of our mother, Evelyn Scott we would like to say how deeply honored we are for this significant acknowledgment from the community of our mother’s life work and commitment. She was a staunch advocate of education, health and social justice and her life contribution changed the political landscape of this nation. We know, without a doubt, our mum would be deeply humbled and extremely honored by having a school named after her.

Our mother would want us to share her personal words with each and every student that enters the school yard.  Mum would always say to school students she met to remember these two things; a good education is really important and that truly anything is possible.